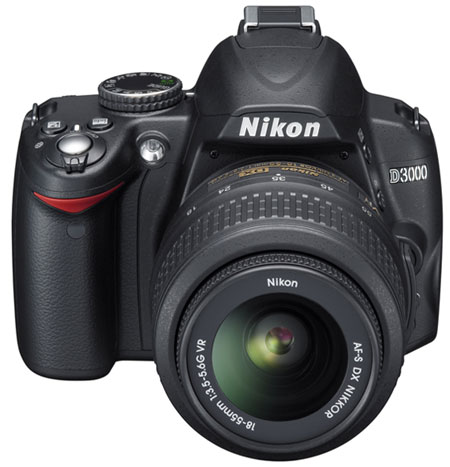 The Nikon D3000 is the company’s latest entry-level DSLR, featuring 10.2 Megapixels and an easy-to-use control system aimed at DSLR beginners or those wanting to upgrade from a point-and-shoot camera. Announced in July 2009, it’s the successor to the popular D60, and sits below the D5000 in the current Nikon range. The major new features are a larger 3in screen, an 11-point AF system and a new Guide mode
for beginners.
Like earlier Nikon entry-level DSLRs, the D3000 shares a number of features with its predecessor. At its heart is the same 10.2 Megapixel DX-format CCD sensor used in the D60, not to mention the D40x and D80 before that.

This sensor was certainly capable of delivering great results on the earlier models which employed it, although it means the D3000 can't offer Live View or a movie mode. The cheapest Nikon body with Live View and video remains the D5000.

While you won’t be composing with the D3000’s screen, the monitor itself has enjoyed an upgrade, increasing from the 2.5 inches of the D60 to a 3in model. Like other entry-level DSLRs, the screen resolution remains 230k pixels and it’s also fixed in position.
The optical viewfinder remains the same size as the D60 with 95% coverage and 0.8x magnification, but one glance through it reveals one of the D3000’s other major upgrades: an 11-point AF system. This shares the same Multi-CAM 1000 AF module as the D90 and D5000, and is significantly more sophisticated than the basic 3-point system of the earlier D60. Since it uses the same AF module as the D90 and D5000, Nikon’s clearly seen no reason not to re-use the same focusing screen too, which means the D3000 inherits the very useful on-demand LCD gridlines in its viewfinder as those models. This is particularly useful since there’s no Live View grid option to fall back on.

Note like the D5000, D60, D40x and D40 before it though, the D3000 still doesn’t feature a built-in AF motor to drive older lenses. So lenses without their own built-in focusing motors become manual focus only. Like those other bodies, you’ll need an AF-S lens from the Nikkor range to enjoy autofocus, but luckily that includes most of the options aimed at D3000 owners.
Nikon’s headline feature for the D3000 is its new Guide mode, which helps DSLR first-timers to choose their shooting mode and achieve the results they’re after, such as a small depth of field, or freezing fast action. Nikon’s DSLRs were already some of the most beginner-friendly around, and this enhancement only makes them better in this regard.
Despite the absence of Live View, the D3000 is a tempting prospect for first-time DSLR owners or beginners who want some guidance at first with the potential to grow as time goes on. Nikon's certainly put some effort into making these photographers feel at home with the D3000, but Canon and Sony have also targeted this growing market with their EOS 1000D / Rebel XS and Alpha A230 models. All three feature easy controls and image stabilisation to combat camera shake, but with some key benefits over the D3000: Canon's model boasts Live View, while Sony's features built-in stabilisation which works with any lens you attach.

But how do they compare in terms of image quality, handling and ease-of-use? Find out in our Nikon D3000 full review where we'll closely compare all three rivals. if you're in the market for a budget DSLR, you've come to the right place!
﻿
مشاركة الموضوع ؟      